The Love I Have For You

by Miss Tess & The Talkbacks 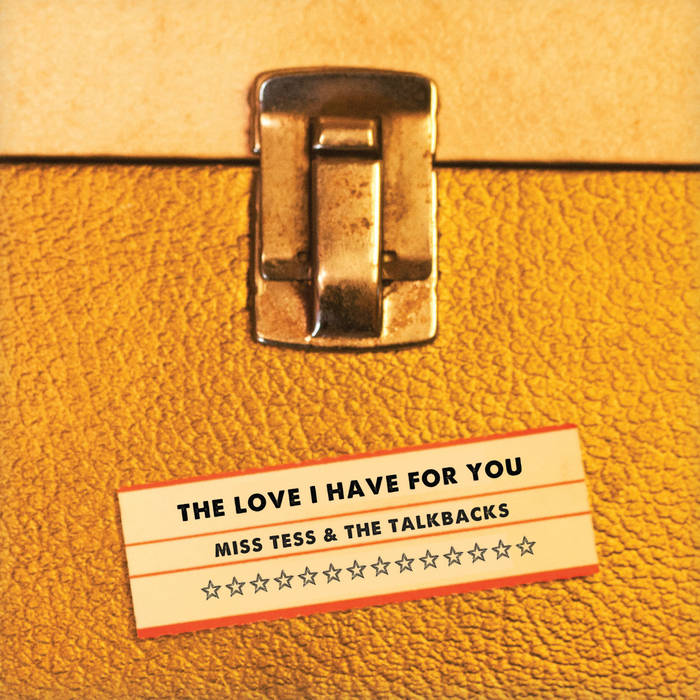 Jim Child Miss Tess and the boys are performing up here in Maine and were on a Portland "local TV show" last night after the news (WCSH6 - "207"). They are FANTASTIC! I've been purchasing both their albums — you're able to download FLACs !!! I make MP3 copies and import those into my iTunes Library.

I am in love! :-) Favorite track: Hold Back The Tears.

The Brooklyn-based singer and her band make grooving modern vintage music that nods to the traditions of saloon jazz, country swing, early rockabilly, and New Orleans second line, yet somehow maintains a unique and personal sound. Miss Tess & The Talkbacks have just released The Love I Have For You, their second on rootsy label Signature Sounds. The new album was produced by Miss Tess & The Talkbacks and recorded and mixed by Devin Greenwood (Norah Jones, Anais Mitchell, Amos Lee) in Brooklyn, NY. The 7-song album features six covers and one new original and pays homage to some of Tess’s favorite singers and songwriters including Willie Nelson, Bonnie Raitt, Neil Young, Ted Hawkins, Randy Newman, and Hank Williams. Miss Tess explains how the band chose the 6 songs to cover: “Each artist we covered has held a special place in the history of our lives, as well as in the history of American music. These folks are all musical giants who dedicated their lives to music, and for that I hold them in the highest esteem.”

In their earlier incarnation, they were known as Miss Tess and the Bon Ton Parade and that, says Miss Tess, proved both too small of a box and too confusing. They were consistently confused for a zydeco band or a New Orleans band. "When I conceived of the band in Boston back in 2006 or so, we had a horn player and we were a little more jazz influenced," she says. “In the last couple of years the sound has evolved, something that naturally happens when you spend so much time on the road with a band. We’ve become slightly edgier and there is some more country and early rock n’ roll coming through. We now have two electric guitars. I'd been thinking about a change for a while and we finally settled on a name. With a name like the Talkbacks, it is what it is."

That's a good thing because it's not easy to define Miss Tess and the Talkbacks.

Their last album, 2012's Sweet Talk, includes 10 originals and a smoldering cover of "I Don't Want to Set the World on Fire, " the Ink Spots classic. The originals include the bawdy cabaret of "Don't Tell Mama," the waltzing "Save Me St. Peter" ("Walking on water is a hell of a stand / With no solid ground and no helping hand."), the dance hop, swamp rocking of "People Come Here for Gold," and the burning jazz blues of "If You Wanna Be My Man," which easily could have been sung by Ella Fitzgerald or Sarah Vaughan, two of her early idols.

Miss Tess also lists Bonnie Raitt and Tom Waits among the artists she admires. Both have that ambitious stylistic range. Waits, she notes, "was able to take some of those older jazz and blues influences and kind of twist them around and do his own thing." That's just what Tess and her band do again and again with top notch musicianship to boot.

"I think we do bring new sounds to the table," she says. "I'm trying to figure out how we do that. Our ears have been informed by different things than the people who were living back then. We're not actively trying to copy anything. We're making fresh arrangements, kind of taking the feeling, style, and soul from some of this older music that we like. "

She says lately the band has taken a turn towards more of a groove. "The newer stuff has been more early rock and roll, some Chuck Berry influence, some Doug Sahm," she says. "I think lately we've been interested in dance music, something with a beat, a groove, something that makes you want to shake around."

Bandcamp Daily  your guide to the world of Bandcamp

Featuring Oakland sounds from the Smart Bomb collective and Samplelov.